Jaguars now have home in the New Peru’s National Park

A massive swath of protected Amazon rainforest—a green corridor teeming with wildlife— has just grown by 3.3 million acres thanks to the establishment on Sunday of a new national park, Sierra del Divisor, in Peru. The addition of the new park—which is larger than Yosemite and Yellowstone National Parks combined— “strategically secures the final link in a 67 million-acre Andes-Amazon Conservation Corridor, forming one of the largest contiguous blocks of protected areas in the Amazon,” according to the conservation group Rainforest Trust. That means that the new park is a large and important puzzle piece in securing a ribbon of wild land “that extends for more than 1,100 miles from the banks of the Amazon in Brazil to the snowy peaks of the Peruvian Andes,” according to Paul Salaman, of Rainforest Trust.

The addition of this park, according to Mother Nature Network, links a number of protected areas, and “by filling in this gap, it strengthens the regional wildlife corridors that help boost the genetic diversity of rare species and give wildlife more space for adapting to climate change.”  Large mammals like jaguars and tapirs, which are in decline throughout much of their range, live here. And Sierra del Divisor is home to cougars, giant armadillos, sloths, many kinds of monkeys, including red uakari and Goeldi’s monkeys, 80 amphibian species, as well as 300 kinds of fish, and 550 bird species.

Adrian Forsyth, Executive Director of the Andes Amazon Fund, tells Mongabay that the park is good for people, animals, and the environment:  ”It’s primary forests are massive and maintain not just immense stores of carbon but are also the ark that will help carry huge amounts of biodiversity through the climate change bottleneck. Thousands of indigenous people now have their ancestral homeland and the natural life support systems that sustain their communities protected by national law. It’s a huge win for the planet!”  The establishment of Sierra del Divisor as a national park has been years in the making, and some people had begun to despair that it would never happen. According the Guardian just this past July:  In 2006 Peru’s government established a 1.4 million hectare temporary “protected natural area” in this region called the Sierra del Divisor Reserved Zone. Six years later a government commission agreed it would be converted into a national park, and, all that remains now, after a painful administrative process, several key advances made this year and indigenous leaders lobbying various ministries, is for Peru’s Cabinet to approve it and the president, Ollanta Humala, to sign off on it. That is how it has stood since early May – and still nothing.

But now something. Something big, in fact. “After two decades of collaborating with CEDIA [Center for the Development of an Indigenous Amazon] to protect indigenous territories and establish nature reserves, parks and sanctuaries throughout the Amazon of Peru, we have finally completed the centerpiece with the declaration of Sierra del Divisor National Park,” Salaman of Rainforest Trust says. “This permanent conservation corridor is one of the greatest refuges for biodiversity on Earth.”

Thanks to source: http://thewildlife.wbur.org/2015/11/11/a-win-for-the-amazon-peru-creates-massive-national-park/ – By Vicky Croke

Author: One to One Coordinator

One to One International, Language Academy, Migrant Consultant & Animation School in Lima, Peru at your service!!

ENCUENTRANOS EN – FIND US IN 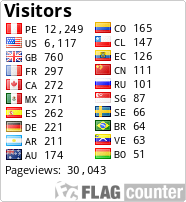 SUSCRIBETE A REVISTA – SUSCRIBE TO MAGAZINE